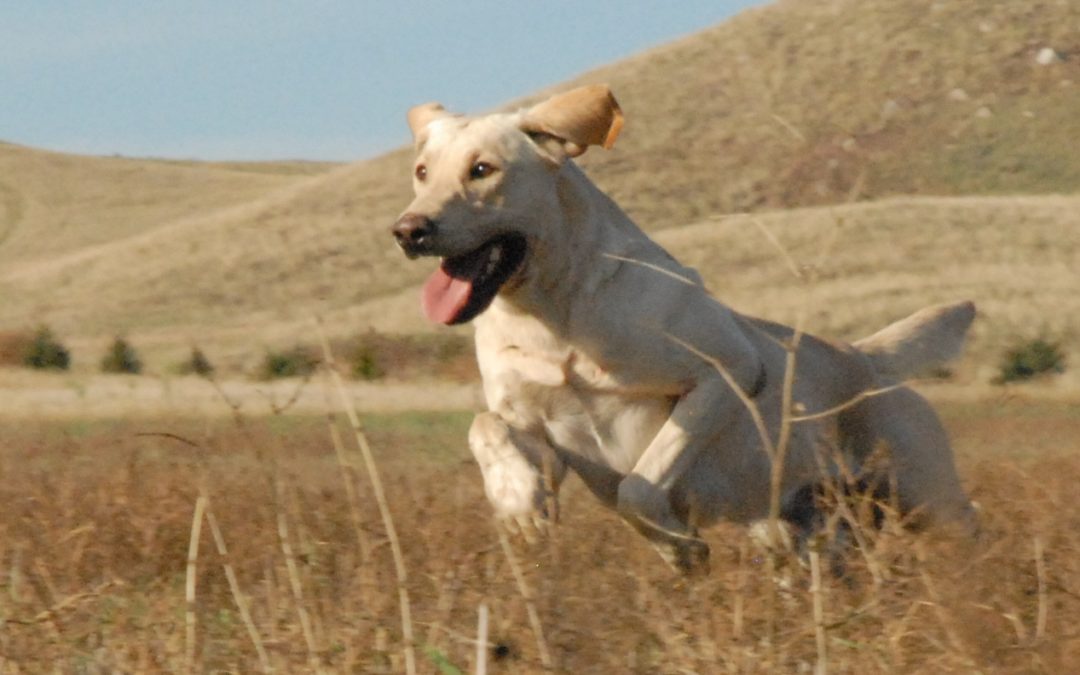 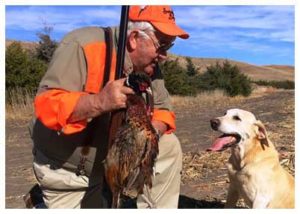 It was 2011 when I arrived a ScatterGun Lodge.  At eight weeks of age life was a pretty big adventure and there would be no better place to experience that adventure than ScatterGun Lodge.  Once all my brothers and sisters left for their new homes I realized, I got to stay.

For the next seven years, I got to spend every single day of my life with my dad, Rip.  If you were a Labrador retriever, having Rip for a dad was as good as it could get.  He was the product of twelve generations of labs going all the way back to our owners’ first field trial dog in 1962.  The best word I can think of to describe him was, he was a stud.  During his fourteen years, he hunted for hundreds of guests.  Ask Hank Williams Jr., Gary Sinese, Bobby Knight, Vice President Dan Quale or who knows how many more and they will all tell you the same thing, my dad was the ultimate hunting dog.

He also was the ultimate dad.  When I was little (not that I was ever really little), I would decide it was time to play.  Dad wasn’t really into puppy stuff but he would lay there and let me chew on him until I got tired or he had enough.  I quickly learned when it was time to quit.  He was also incredibly patient.  While there were three of us that stayed with Chuck & Sheila all year, the other dogs came and went each hunting season.  Dad always just hung out, giving all the strangers a chance to do their thing.  I do remember like it was yesterday my first hunting season.  I had made a long retrieve and dad sat at the end of the field waiting for me to deliver the bird.  About forty yards from the end of the field one of the guest’s personal dog came toward me.  He obviously had spotted a rookie and was going to take my bird.  I stopped, he growled and before I could decide what to do, there was my dad.  Now this was not the gentle, brown eyed lover dog that hung out in the entry of the lodge.  This was a ball of yellow dynamite traveling at 80 miles an hour to deal with the bully.   It didn’t last long, maybe twenty seconds.  The wannabe bird thief only needed eight or ten stitches.

To watch my dad hunt was a thrill.  He literally soared across the cover with a heart bigger than life itself.  How many birds did he pick up during his lifetime, well over 10,000.  Like his dad Maxx and his dad Buster my dad got to spend his last years in the field hunting from the back of Chuck’s truck.  He of course knew exactly what to do when he heard, “put it in the truck” which shall we say is somewhat of a family tradition.

It was in December of 2015 when we noticed dad was not up to par.  He had slowed down but something just kind of said he needed to go see Dr. Wolf.  The diagnosis was pretty straight forward, inoperable cancer.  There was nothing anyone could do but just wait.  Chuck’s rule was the same with dad as it had been with all the other ScatterGun Retrievers.  As long as you can get around and have some quality of life, without pain, you are good to go.  When that changes you will never be kept alive just because it is too hard to say good-by. 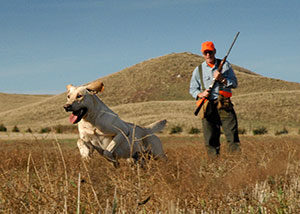 When hunting season came around in 2016, the only one that didn’t know dad was sick was dad.  He had a great appetite, his tail went from side to side at incredible speed, he knew when it was time to go and his favorite words were, “Get in the truck.”  It was no surprise that he found it more difficult to jump in the back of the Suburban to go home at night than he did to go hunting.  Maybe it has something to do with that little extra bit of adrenaline that seemed to show up during the fall.

At fourteen, that is 98 in people years, he was still a Stud.  The whining noise he could not seem to control, started the instant he got in the Suburban and it never stopped until he got back home.  He would wait at the end of the field (just as he had thirteen years earlier as a puppy) and wait for his chance to make one more retrieve.  He knew where to sit, he knew where to look and he knew where to go.  Dad retrieved lots of birds last fall.  He got a little slower as the season progressed and the cancer got worse but his desire never slowed down for a second.  It was mid-November.  Dad was in the truck with Chuck and I was hunting with Tim.  It was mid-afternoon when an old rooster took to the sky and a volley, of not the world’s best shots, followed.  As I headed across the open strip I knew the bird was hit but certainly not dead.  As I reached peak speed I noticed something out of the corner of my eye.  It was my dad using every bit of energy his tired body would give him, headed

toward that bird.  Even though I knew the retrieve would be too far and too tough, I stopped in stride and sat and watched.  I looked back at Tim, who in turn looked at Chuck and a group of amazed customers.  Ten minutes later, it was over.  Out of the cover, some two hundred yards from where he started, came a fourteen year old yellow Labrador with a crippled rooster in his mouth.  The return trip back to the truck took considerably longer than the trip out, but the big yellow tail never quit moving.  He went to Chuck, laid his head on Chuck’s side, looked up and gave him the bird.  There were a few moments that no one said a word, they just watched in amazement at the size of Rip’s heart and his devotion to what he loved to do.  I was glad they were all looking at dad, that way no one saw me cry.  We had all been part of something special, maybe, just maybe the best retrieve ever?

Before we knew it Christmas had come and gone and it was time for the Spring Hunt.  Paul Blanchard and a group of really nice folks came from New Mexico and as usual it was a really fun time.  Dad made a few retrieves but I guess we all knew it would probably be his last hunt at least here on earth.  He got a little slower, it took a little more time to walk from the house to the lodge, and we all knew the cancer was not getting any better.  That spring Dad did something rather strange.  We have free access in and out of the garage at our house.  Our routine was to spend the night inside, wait for Chuck or Sheila and feed us, then head to the lodge.  For whatever reason dad did not stay inside with us.  As first light he would head outdoors, find his favorite spot on the lawn where he could see the lodge and the fields below and wait for the day to start.  We all knew that the time was getting close but we continued to spend each and every day being together in the place we so love. 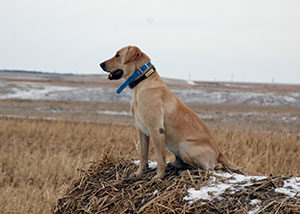 There was a lot of excitement at ScatterGun this Spring.  Chuck was going to take all of his sons on a once in a lifetime trip to Argentina.  It was the 2nd of June and he headed to Minneapolis.  The night before he came and sat on the steps with Dad.  They talked for a long time about their 14 years together, the people they met, and the friends they made and of course the legend of the ScatterGun Retrievers.  The old yellow dog had turned mostly gray, but those brown eyes were still as deep as the sky was wide.  When it was time to leave dad watched him drive away his tail slowly moving from left to right.  None of us knew at that moment, Rip had a plan.

The following Tuesday, June 6th would be the day.  Dad knew that while some times Chuck barked more than he did, that inside he was not really that tough.  It was time to say good-bye and he knew that Sheila would help him on his way. After all she was the strongest person in our family.   When Soffie and I saw Dr. Wolf pull up to the lodge we knew what was happening.

Dad’s tumor had gotten worse, he continued to lose weight and his favorite walk from home to the lodge had become a pretty hard task.  He had given a lot of thought about getting to be with his dad Maxx, Grandpa Buster, and all the other Scattergun friends that had passed on.  He had told me about his visits with his dad about a place where hunting season was open all year long.

That morning Sheila had gone to town and dad told me about what was going to happen.  It would now be my job to take over his place at Scattergun just as it was his place when Grandpa Maxx left.  I told him “no”, I just wanted him to stick around and for things to stay the same.   I knew that could not happen but that did not mean I could not wish for it to be.  He had taught us all so well.  Things like loyalty, dedication, patience, and unconditional love were given every single day of his life for fourteen years.

Doc Wolf made sure we all had a chance to say “good-bye”.  Bruce and Ronnie had found a perfect place for dad right next to Maxx in the yard.  He knew how incredibly sad Sheila was and wanted her to know how much he loved her and appreciated her help in this last step.  He also wanted me to let all the guests, guides, and staff that had been a part of his life know how much he appreciated their kindness.

On a dirt road thousands of miles away from ScatterGun Lodge a Seventy Five year old man stood with his sons enjoying the hunt of a lifetime.  For a moment the bird filled sky froze in time and a warm soft light passed overhead.  Dad had stopped to say good-bye on his way home.

R.I.P.  you will never be forgotten.

You have Successfully Subscribed!